Home > News > Application and Maintenance of Thickener in Concentration Plant

Application and Maintenance of Thickener in Concentration Plant 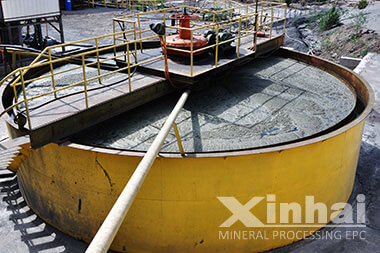 As one of dehydrating machines, thickenercommonly used for concentrating or dehydrating before filtering. It also could be used as machines to concentrate and purify coal, chemical, building material and source of water and sewage treatment which contain solid slurry in industry.

Though thickener is easy-managing in common operation, thickener is crucial to mineral processing plant. Thickener is one of the most important equipments in processing plant whose breakdown will lead to the whole plant shutdown. Then let us talk about some tips relating to maintaining thickener which are concluded by Xinhai drytailing technicians in yearly experience.

1.Tips of turning on and turning off

2.Tips on common usage of thickener

During the common usage of thickener, in order to reach the standard of production, we should often check the concentration of both feeding ore and thickened ore,together with the quality of the overflowing. In practice, we can control the speed of discharging to control the concentration of the thickened ore. But while doing that, we should pay attention to prevent the solid material from increasing in overflow to assure the quality of overflow.

Firstly, Concentration of feeding and discharge

Thirdly,Viscosity of foam in slurry

Fourthly,Existence of reagent and electrolyte

Sixthly,Value of the thickened ore material

Apart from these factors, another important factor is the mud which is difficult to settle.Mud come from two way: first, the primary slime which formed in mining stage; second, secondary slime in crushing stage.Because the slime particle is very small, the surface area of particle is big. So the slime could save much water,and the content of the water depend on the wettability and capillary phenomenon. Because of the electrostatic repulsion of the molecular force and charged ion resulting balance of itself settlement tendency, colloidal particles between 0.1 micron to 0.001 micron don’t have precipitation actually. So the slime is the most difficult material to settle in the process of settlement happened in thickener. During the mining processing, we commonly put electrolyte and colloidal surfactant (water glass or soda) to adjustment the ratio of the liquid material and solid material in slurry, or heating the slurry to help dispersive slime to flocculation and settle.

Currently, thanks for the national policy, drytailing project will be adopted by more plant. The demand of thickener will increase.So what we talked about thickener above is necessary .